The Story of Team Primness

This is a photo taken of the 2B1, Primness Team taken at Khe Sahn after extraction on from XD895468 at 0700 25 Aug. The team initially attempted insert at XD904496 on 20 AUG, but took fire in the LZ, killing L/Cpl. Gary Talent. A second insert was aborted on the 21st due to 12.7 fire. The team inserted 3K South of the original zone on 23AUG, but was surrounded about 1600 24 AUG, broke contact in a running fire fight, and requested an extraction that was aborted due to hostile fire and darkness. 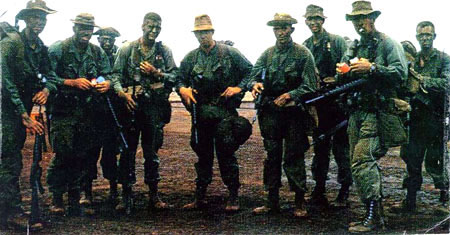 Compromised by the extraction attempt, the team made its way to the extraction LZ, surrounded again, but boxed-in with something in excess of 1,000 105/155 fired from Khe Sahn and the Rockpile. (From the narrative summary of INTSUM#39, 26th Marines Command Chronology, 1 July-30 Dec1967.) I recall the patrol as a little more, ah, exciting, than the INTSUM indicates, but that's only my memory.

What's curious though, is this photo appeared on the book jacket of one of the many accounts of Marine Recon in Vietnam. I saw it years ago, photocopied it and forgot about it. I think the book may have been one of the Force Recon histories.

I have no idea who took the photo, but I'm sure of the time, place and circumstances. I can identify Scott Richardson, second from left; Vic Hernadez, third from left, in the background; forth left, me, without a cover; far right, Lt. Pfeltz, with cigarettes. I can't put names with the other faces.

This is one of those missions that defined both the best and worst of the Recon experience for me. It speaks to the command attitude that presumed Recon teams were bullet proof and expendable. I'm glad, that in my subsequent eighteen months, I saw that gradually change. It reinforces the grunts' perception that officers always got the gravy. The entire team was written up for something, but only Lt. Pfeltz was decorated. I'm glad he was, though. He was a good officer. I was the WIA referenced in the INTSUM, but with the "three heart" rule, well, you know. It was only a tiny ding, anyway.

The team, under Richardson, did something to piss off the Gunny the day we got back. We filled sandbags for three days, and Capt. Williams sent us to do a walk-out from Lang Vei on the fourth. We got in a keystone cops firefight with an SOG team, and got to sit around the SF camp for a couple of days drinking their bourbon. When we got back, Williams had transferred to 2/4, Pfeltz had gone to the rear for rotation, we had a different Gunny and I wasn't a new guy anymore. Wierd, transient world.

But, that's not very important. I think this is, though. On that one patrol, we were shot out twice, picked up at insert on the third try, were surrounded twice, got through a bad afternoon and worse night, and by that some recon magic combination of luck, fortitude, grace and skill came back do it again. And again. Probably the rule rather than the exception in 1967.

That was the first month of my tour, and I learned moral courage from that team. As the new guy, it never occurred to me that they wanted to go into back into that area even less than I did. They knew the stakes; knew bone certain we'd get popped. Nobody spoke a word, but their demeanor said: "Lets just get it done."

There are no longer occasions in my life that demand that kind of courage, but I'm proud to know I once had it, and try to access it when I perceive my lot as hard. I'm even prouder to have served with men whose example enabled me to find it in the first place.