A Tribute to Our Corpsmen 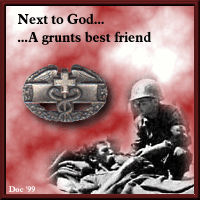 Pictured above left is our beloved Eagle, Globe, and Anchor...the inspiration for all Marines. On the right is the U.S. Navy Combat Corpsman insignia.
Everybody knows that the Marines are the Marines and the Navy is the Navy. Right?
WRONG!

He is there when it seems the world is coming to an end. The automatic rifle fire, hand grenades and mortars exploding. You're gasping for air because the hole in your chest is the size of a baseball. You're trying with all your personal fortitude and training to stay calm but you know that your life is slipping. Your insides are on fire and the pain seems unsurmountable. People are screaming "Corpsman Up" from the top of their lungs. For some unknown reason to me, this is like music to his ears. He will crawl over, around and thru anything in his path to get to that wounded Marine. Not trying to make lite of this but sometimes I wonder if they don't think they're Superman. We have seen these men totally disregard their own safety, taking hits themselves and still do whatever necessary to get to our side. Their only mission at this point is to keep you alive, comfort and console you, until you can get that precious medivac back to the rear. These men joined the Navy but willingly volunteered to serve with us Marines knowing full well that they were going to experience life beyond their naval expections. The compassion they displayed for their fellow teammates is that worthy of any Marine. They might have worn a Navy insignia but they were nothing more than a damn good Marine.

Never were Shakespearean words more true than, "He who sheds his blood with me this day is my Brother".
For this reason, it is most appropriate to showcase our Corpsmen on a special page.

"You guys are the Marine's doctors; There's no better in the business than a Navy Corpsman"
Lieutenant General Lewis B. "Chesty" Puller, U.S.M.C

These are just a few photos of our Corpsmen. I would love to see our
members send in more pictures so we can honor these very special men.
God Bless All the Corpsmen of 3rd Recon Bn.
If anyone can add to this collection please contact Webmaster. Thank you.

Lee Webber served with Delta Co 68' and was medivacted from Khe Sahn on day 63 of the seige.
Photo right: Taken Nov. 2003 on Doc's visit to Okinawa USMC Birthday.