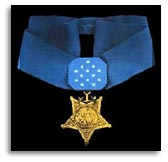 The highest award for valor in action against an enemy force which can be bestowed
upon an individual serving in the Armed Services of the United States..... Learn More

"There are two tangible symbols of selfless sacrifice.
There are two symbols representing the ultimate offer of one's life for others.
One of those symbols is the Cross of Christ and the other is ...
the Congressional Medal of Honor."